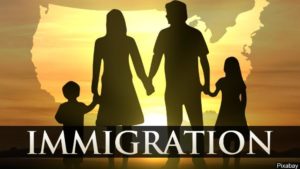 Linda Zuba spoke about the southern border, and told the stories of many who fear for their lives trying to make it to the United States. Sara Dady discussed what she calls misconceptions surrounding immigration.

“For one thing we don’t provide enough visa’s for the number of people our economy demands,” she says. “So we do not have a lawful way for everyone to make an application for a visa let alone the for those we actually need here, number two we’re failing in our humanitarian responsibilities.”

They say there needs to be reform for changes in immigration laws and processes. Illegal immigration continues to be a hot topic in the US as the pentagon said this week it has plans to fund more of the border wall on the Southern border to fulfill President Trump’s promises.