Home Resources Lives On Hold: One Family’s Experience In The Long Line For Immigration Services 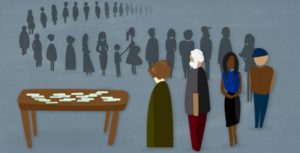 Like other expectant parents, Kenadee Ferre and her husband Eleazar Ishmael Castro Afane are a bundle of excitement and nerves as they prepare for their birth of first children.

Learning the gender of their unborn twins, what to name them and how to plan for upcoming changes in their lives are just a few of the relatable challenges.

But unlike most couples, Ferre, 23, and Castro, 30, must figure out their future while living 3,000 miles apart and with no clear sense of when they’ll be together again. Ferre, who lives in Mona, Utah, and Castro, who is in gang-plagued El Salvador, are divided by an overwhelmed immigration system that has put their lives on hold.

For more than a year, Castro’s been waiting to join his family in the U.S. Their hopes hinge on his receiving an immigrant visa, the first step toward getting a green card and eventually U.S. citizenship.

“We are always praying and asking God to help us,” Castro said in a video call from El Salvador.

But the line for immigration services is long. With their babies on the way, the couple’s urgency to get Castro legal residency has increased, adding stress to what should be a happy, yet already anxiety-inducing milestone in their lives.

“We have to be optimistic because that’s the only way,” Ferre said. “Because otherwise it’s just super frustrating and sad.”

It’s a frustration that a growing number of would-be immigrants and citizens in Utah and around the country are facing. As the Trump administration continues to crack down on immigration — legal or otherwise — a backlog of immigration-related applications is also increasing.

Nearly 1 million people applied to be U.S. citizens last year, the highest number in a decade, according to the Department of Homeland Security In some cases what normally takes six months is dragging on for two years, The Associated Press reported last month.