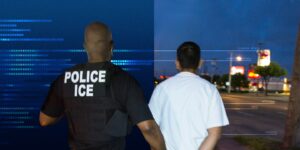 The company signed a contract with an ICE division that plays a key role in deportations.

THE POPULAR LEGAL RESEARCH and data brokerage firm LexisNexis signed a $16.8 million contract to sell information to U.S. Immigration and Customs Enforcement, according to documents shared with The Intercept. The deal is already drawing fire from critics and comes less than two years after the company downplayed its ties to ICE, claiming it was “not working with them to build data infrastructure to assist their efforts.”

Though LexisNexis is perhaps best known for its role as a powerful scholarly and legal research tool, the company also caters to the immensely lucrative “risk” industry, providing, it says, 10,000 different data points on hundreds of millions of people to companies like financial institutions and insurance companies who want to, say, flag individuals with a history of fraud. LexisNexis Risk Solutions is also marketed to law enforcement agencies, offering “advanced analytics to generate quality investigative leads, produce actionable intelligence and drive informed decisions” — in other words, to find and arrest people.

The LexisNexis ICE deal appears to be providing a replacement for CLEAR, a risk industry service operated by Thomson Reuters that has been crucial to ICE’s deportation efforts. In February, the Washington Post noted that the CLEAR contract was expiring and that it was “unclear whether the Biden administration will renew the deal or award a new contract.”

LexisNexis’s February 25 ICE contract was shared with The Intercept by Mijente, a Latinx advocacy organization that has criticized links between ICE and tech companies it says are profiting from human rights abuses, including LexisNexis and Thomson Reuters. The contract shows LexisNexis will provide Homeland Security investigators access to billions of different records containing personal data aggregated from a wide array of public and private sources, including credit history, bankruptcy records, license plate images, and cellular subscriber information. The company will also provide analytical tools that can help police connect these vast stores of data to the right person.

By Sam Biddle for THE INTERCEPT
Read Full Article HERE