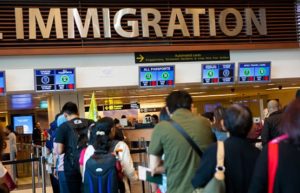 When it comes to immigration, it’s too bad legendary comedian Joan Rivers is no longer around to ask, “Can we talk?” Because few policy issues are more important, create more political division, are more misunderstood and need more reasonable and rational discussion.

Let’s start with some facts: Roughly 45 million people, or 13.7% of the total U.S. population, are immigrants today, including illegal immigrants. This percentage is not a historic high. That occurred in 1885, at the height of Eastern and Southern European immigration, when 14.8% of the populace was not born here. The percentage again approached that peak in 1910. Then, in the half-century following World War I, immigrants entering the country declined dramatically to 4.7%. It’s risen steadily back to pre-World War I proportions since 1970.

That steady increase, especially of unauthorized immigrants, combined with significant economic changes caused by globalization and technology, has led to a backlash of today’s wave of Latin American immigrants. Of course, this visceral response shouldn’t surprise us: No generation living in this country since 1700 has openly welcomed the arrival of new settlers. The original English settlers disdained the Scottish immigrants of the mid-1700s. This newly combined demographic scorned the Irish and German wave of the 1840s and 1850s. The new melting pot of British, German, and Irish ridiculed and excluded the Italians and Eastern European Jews who started arriving en masse in the latter decades of the 19th century. And Asian immigrants to America have always struggled to be accepted.

But let’s be clear: while there are legitimate concerns about illegal immigration (see below), there’s no turning back the clock in terms of the demographic changes occurring in this country. A recent report by Axios, based on the U.S. Census Bureau and United Nations data, shows that by 2040 not only will there be more (current) minorities than whites, there will be more senior citizens than children. That’s a demographic change that’s far more important than the growth of non-European citizens. In fact, it should send shivers down the spines of both business owners in need of employees and government officials worried about Social Security trust funds running out of cash by 2034.