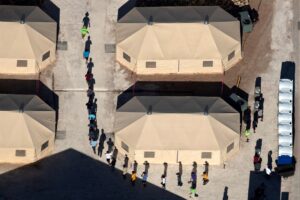 The parents of 506 separated migrant children still haven’t been found, however. Lawyers say the parents of 322 of them were likely to have been deported.

WASHINGTON — The lawyers working to reunite immigrant parents and children separated by the Trump administration reported Wednesday that they have found the parents of 105 children in the past month.

The steering committee of pro-bono lawyers and advocates working on reunification said it had yet to find the parents of 506 children, down from 611 on Jan. 14, the last time it reported data to a federal judge overseeing the process.

The lawyers said the parents of about 322 of the 506 children are believed to have been deported, making it more difficult to find them. The lawyers are not required by the judge to say how many of the parents and children have been reunited.

The Biden administration recently formed a task force that will place the responsibility of finding and reuniting the families separated by the Trump administration, primarily under the “zero tolerance policy” of 2018, in the hands of the federal government. In their court filing Wednesday, lawyers representing the separated families and working to reunite them said they would work with the task force.

Lawyers for the Justice Department said they expect the task force to “resolve many — if not all — outstanding issues” related to the lawsuit, filed in the Southern District of California, that resulted in the reunification process.