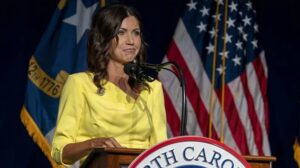 A nonpartisan group of lawyers released a statement on Monday in opposition to the deployment of non-federalized National Guard troops to the border by South Dakota Gov. Kristi Noem (R) and Texas Gov. Greg Abbott (R), concluding that the states are “way out of their lane.”

Noem last month announced that she was deploying as many as 50 National Guard troops to Texas to help “secure” the U.S.-Mexico border, contending that the surge in border crossings “requires the kind of sustained response only the National Guard can provide.”

She upped the deployment last week, announcing that the state would be sending 125 additional National Guard members to the border to help federal immigration authorities.

Abbott in March said he was sending 500 members of the Texas National Guard to the border as the area was seeing a spike in migrant crossings, according to Politico.

In May, the governor announced that hundreds of additional personnel from the state’s Department of Public Safety would be deployed, Politico reported.

The reinforcements at the border come as the country has seen an increase of migrants trying to cross into the U.S at the southern border.

The coalition of attorneys, dubbed the Lawyers Defending American Democracy, slammed the moves by the states, writing “Democracies do not have private armies.”

“Gov. Noem should think again before sending 50 of her state’s National Guard members to interfere in matters constitutionally committed to the responsibility of the federal government – with or without private funding,” the group wrote in a statement.

“Lawyers Defending American Democracy strongly opposes the South Dakota mini-deployment to Texas. This action by Texas, aided and abetted by South Dakota, serves to frustrate federal policy and needlessly complicates the task of the federal officials who are charged with its enforcement,” the statement continued.

By Mychael Schnell for THE HILL
Read Full Article HERE