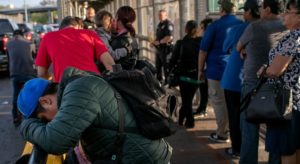 WASHINGTON — A class-action lawsuit filed in federal court Thursday alleges that the Trump administration’s ban on legal immigration in response to the COVID-19 pandemic unfairly separates parent from children who are on the cusp of turning 21 years old.

One such parent named in the lawsuit, a Mexican woman filing under the name Mirna S., lives lawfully in the Bronx, New York, under a visa granted in exchange for her cooperation with U.S. law enforcement against her abusive ex-partner. She was due to bring her 20-year-old daughter safely to the U.S. in the coming months on an approved visa, but she will now be unable to do so because her daughter will turn 21 in June.

President Donald Trump’s proclamation April 22 significantly curtailed legal immigration into the U.S., including limiting entry for immigrants’ children who are 21 and older. Advocates say they do not know how many people that provision may affect, but the nonpartisan Migration Policy Institute estimates that the proclamation as a whole will affect more than 50,000 over 60 days.

Those children are now put into a new non-prioritized category, where wait times for visas can take up to 76 years, the lawsuit alleges.

Although Mirna S.’s attorney made multiple requests to expedite her daughter’s visa application, the lawsuit alleges, the administration’s order was issued so quickly that “it was virtually impossible for any visa petitioner with a sponsored child … to seek emergency consular services before it took effect.”

“For the United States citizens and lawful permanent residents sponsoring children and derivative child relatives who will turn 21 during the Proclamation’s effective period, the Proclamation will result in a lifetime of family separation,” lawyers for the plaintiffs said in the filing.

Although the executive order was issued for 60 days, the administration can extend or expand it and has plans to do so, according to a current and former administration officials