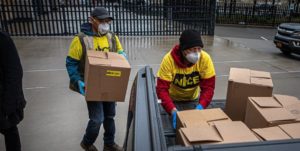 Moreno and the New York City nonprofit New Immigrant Community Empowerment, or NICE, whose Workers Rights Program she directs, advocate on behalf of jornaleros, Latino immigrant day laborers who work for contractors. The center acts as a liaison between workers and employers, ensuring that contractors don’t withhold wages and that laborers are paid adequately and are organized according to experience.

But that was before COVID-19 upended life in the heavily immigrant neighborhood of Jackson Heights, Queens, where NICE is based. Now, with no jobs to be had, Moreno’s focus has shifted: She’s simply helping immigrant families get access to food.

“The first wave was joblessness and unemployment,” Moreno said. “And these are people who cannot afford not to go to work.”

Across the country, advocates like Moreno are working to provide basic necessities to immigrant families, especially those without legal status who lack a safety net and are too worried or threatened to seek medical treatment or help.

In New York, NICE is one of many groups pivoting from their regular missions. Its “relief brigade” brings groceries to families in the neighborhoods of Jackson Heights and Elmhurst, which have some of the highest numbers of COVID-19 casualties in the city.

“Despite them being part of a high-need population, they are still giving their time and effort to food distribution efforts,” Moreno said of the neighborhood members helping deliver the much-needed items.

Moreno, 32, who has been working in New York for the past year after moving there from Gainesville, Florida, said “layer upon layer” of issues have made the pandemic an existential threat in the neighborhoods she serves.

One issue is the high price of medical care, especially for immigrants who don’t have access to insurance.