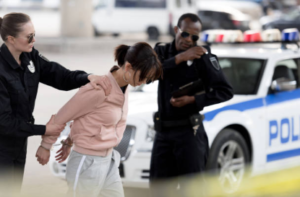 The raids, planned months ago, happened just hours before President Donald Trump visited El Paso, Texas, the majority-Latino border city where a man linked to an online screed about a “Hispanic invasion” was charged in a shooting that left 22 people dead.

“On a day when we seek unifying words and acts to heal the nation’s broken heart, President Trump allows so many families and communities to be torn apart,” said Angelica Salas, executive director of the Coalition for Humane Immigrant Rights.

About 600 U.S. Immigration and Customs Enforcement agents fanned out across the plants operated by five companies, surrounding the perimeters to prevent workers from fleeing.

In Morton, about 40 miles (65 kilometers) east of the capital of Jackson, workers filled three buses — two for men and one for women — at a Koch Foods Inc. plant.

Those arrested were taken to a military hangar to be processed for immigration violations. About 70 family, friends and residents waved goodbye and shouted, “Let them go! Let them go!” Later, two more buses arrived.

A tearful 13-year-old boy whose parents are from Guatemala waved goodbye to his mother, a Koch worker, as he stood beside his father. Some employees tried to flee on foot but were captured in the parking lot.

Workers, including Domingo Candelaria, who could show they were in the country legally were allowed to leave the plant after agents searched the trunks of their vehicles.

“It was a sad situation inside,” Candelaria said.

Mississippi is the nation’s fifth-largest chicken producing state and the plants’ tough processing jobs have mainly been filled by Latino immigrants eager to take whatever work they can get. Chicken plants dominate the economies of Morton and other small towns east of Jackson.