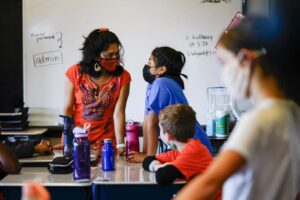 PHILADELPHIA (AP) — Philadelphia parents who don’t speak English say they’ve long been excluded from parts of their children’s education because of language barriers, an issue that’s only been exacerbated by the pandemic and the return to in-person learning.

Parents told The Associated Press stories of students being used as translators despite federal prohibitions, incorrect telephone translations or poor communication when their children were being bullied. Experts said Philadelphia is not alone, noting that many school districts have lagged in creating systems that treat non-English speakers equally rather than responding to complaints.

Philadelphia school district officials said the district has made a lot of progress in recent years, including sending communication in parents’ languages and hiring dozens of additional in-school interpreters called bilingual cultural assistants, or BCAs. They said the district has policies against using children as translators and robust guidance on how to request language help.

Mandy, who asked the AP not to use her last name, has a 10-year-old son with special needs. She struggled with whether to return him to in-person schooling but ultimately decided the virtual option didn’t offer enough support for parents who don’t speak English.

Mandy said her biggest struggle with language access has been during special education meetings at her son’s previous school. Even though things have improved since she transferred him to another school in 2020, she still spends hours translating documents into Mandarin because the district provides very few fully translated documents.

During one meeting, a telephone translator said she didn’t know anything about special education and refused to translate, so Mandy started bringing a bilingual friend as a backup. Another time, a translator told Mandy the district was going to teach her son to “eat meat,” which her friend quickly corrected, explaining the specialist was talking instead about goals for feeding therapy.

By Claudia Lauer and Vanessa A. Alvarez for THE ASSOCIATED PRESS
Read Full Article HERE