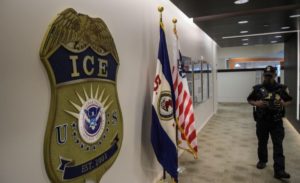 Twenty Lake County Sheriff’s Office employees have been trained to serve warrants for ICE, as part of a program meant to make it easier for jails to hold immigrants suspected of being in the country illegally.

The Sheriff’s Office in a statement Thursday said it had arranged training for 18 correctional officers and two deputies assigned to its warrants unit as part of the new Warrant Service Officer program, which was launched by U.S. Immigration and Customs Enforcement in May.

The program authorizes deputies, after just eight hours of training, to serve warrants on the behalf of federal agents, resulting in inmates being held for up to 48 hours after they have served their time on local charges.

The two-day window is meant to give ICE time to decide whether to pick them up.

The LCSO statement said the program “serves to broaden ICE’s enforcement authority and allows for a smooth custodial transfer of criminal aliens to ICE custody.”

“This new program gives us an additional tool that we can use to help ICE remove criminal illegal aliens from our jail, rather than putting them back in our communities to commit more crimes,” Sheriff Peyton Grinnell said. “This partnership is win-win; it helps ICE do their job, and helps us do ours.”

The program has been criticized by immigration lawyers and activists, who question whether it is constitutional to extend federal authority to local cops, as well as among some in law enforcement, who argue that it imperils trust in police among immigrant communities.

The program was designed in part to protect local jails that cooperate with ICE from legal liability.

ICE has long used a form known as a detainer, which asks a jail to hold an inmate for up to 48 hours after they would otherwise be released, but that system has been litigated for years, including a pair of rulings in 2014 that found detainers were not sufficient to hold inmates.

A different program called the Basic Ordering Agreement, which began in 2017, sought to address that issue by requiring a warrant in addition to the detainer, but concerns lingered among some sheriffs that they didn’t have staff authorized to serve a civil immigration warrant.