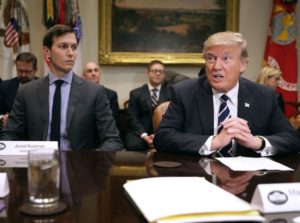 Jared Kushner has been quietly trying to resurrect discussions to overhaul the U.S. immigration system, multiple people familiar with the conversations have told NPR.

President Trump’s senior adviser and son-in-law has been meeting with business leaders, immigration hard-liners and other interest groups important to Republicans with the goal of rolling out a new immigration plan once Trump’s impeachment trial ended.

The effort responds to a lobbying push by business groups, which have sought to use the booming economy — a core part of Trump’s 2020 campaign message — to make their case for more workers to fill critical job openings.

But Kushner’s plan faces daunting odds. There is a gulf between what business interests want and what immigration restrictionist groups are willing to accept. And Democrats are expected to denounce any effort that does not address the 11 million undocumented immigrants living in the U.S. or the DREAMers — undocumented people brought into the country as children.

The White House declined to respond to specific questions about the plan. The details of the plan have not been finalized and could change, or even be shelved.

“There have been no final decisions on specific policy proposals; however, the President has been clear we must have sane, rational immigration policy to keep American citizens safe that includes finishing the wall, securing our border, and a merit-based immigration system that protect American wages and jobs,” White House spokesman Hogan Gidley said.

The strategy is part of White House efforts to demonstrate that it is making progress on Trump’s previous promises while uniting Republicans on a list of principles as they head into the 2020 election.

“The Kushner plan on behalf of President Trump has a lot to like,” said Dan Stein, president of the Federation for American Immigration Reform, which advocates for stronger immigration enforcement.