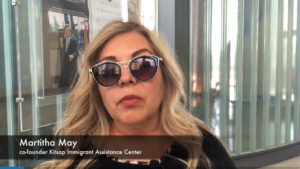 A Kitsap County landscaper arrested by U.S. Immigration and Customs Enforcement on Sept. 23 in Port Orchard has received a reprieve.

Samuel Barojas Vasquez, who was brought to the Tacoma Northwest Detention Center, was scheduled for deportation Monday. On Friday, his request for a “reasonable fear interview” was granted, temporarily halting his removal from the United States, said Ray Garrido, legal services director for the Kitsap Immigrant Assistance Center.

The interview, which hasn’t happened yet, is intended to establish whether Vasquez has credible grounds to fear removal to his native country, Mexico.

Four other people were arrested by ICE Sept. 23 during targeted operations in Port Orchard and Bremerton.

Immigrant advocates in Kitsap County were encouraged by the news on Vasquez but said they will pressure local government officials to intervene on behalf of all those detained.

Leading the charge is Kitsap Advocating for Immigrant Rights & Equality (KAIRE), a newly formed organization aiming to take a stand against increased pressure on immigrant communities from the Trump administration.

President Trump this summer announced he would bolster efforts to deport immigrants in the country illegally. Changes in immigration policy mean more people are subject to “expedited removal.”

“KAIRE is working quickly to uphold Vasquez’s right to due process,” the organization stated. “ICE has been making its presence known for months now and this is the first time the Kitsap community is rallying together to say no more to treating hardworking immigrants like criminals.”