Home Court News Key Issue on Immigration: Is the “Ban” Really a Ban? 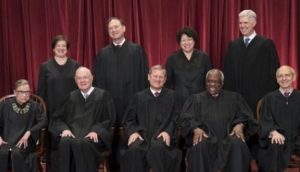 In a period of about 20 weeks, a total of 430 travelers have been allowed to enter the U.S. from the Muslim nations on the terrorist risk list that the Trump Administration and his aides created under his strict immigration policy. And one nation was recently dropped off of that list. The Supreme Court explored on Wednesday whether those two facts are enough to prove that President Trump has not imposed a flat ban on Muslims coming to America.

That could be the crucial question for the Justices, but only if a majority is satisfied that the Court has the power to rule on the legality of the President’s order that supposedly applies to about 150 million Muslims in the five countries that remain on the list. That is a fundamental question about the constitutional separation of powers, and it, too, was very much on the minds of some of the Justices at Wednesday’s hearing.

The Trump executive order at issue has been in full effect, with the Supreme Court’s temporary permission, since December 4 and, in that time, 430 individuals have received waivers and got visas to enter.

The order is the third and latest version of the president’s attempts to craft an immigration control regime that he believes necessary to keep potential terrorists out of this country. However, this is the only one of the three orders to be come up for full review by the Supreme Court, and the Justices energetically debated what Congress may – or may not – have done to give the President the authority he is claiming.

The Court got two totally conflicting arguments on that point.

The government’s top lawyer for Supreme Court cases, Solicitor General Noel J. Francisco, contended that Congress has explicitly handed the President sweeping authority to exclude any alien or any class of aliens if he deems that necessary to serve a national interest. That authority, he said, is so broad that the Supreme Court simply cannot second-guess it.

Francisco also argued that a second law at issue, forbidding discrimination against potential immigrants based on the country where they live, is so narrow in scope that it should not even apply in this instance.