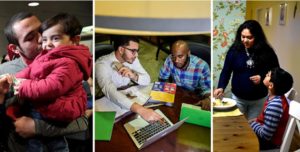 Nearly 34 million lawful immigrants live in the United States. Many live and work in the country after receiving lawful permanent residence (also known as a green card), while others receive temporary visas available to students and workers. In addition, roughly 1 million unauthorized immigrants have temporary permission to live and work in the U.S. through the Deferred Action for Childhood Arrivals and Temporary Protected Status programs.

For years, proposals have sought to shift the nation’s immigration system away from its current emphasis on family reunification and employment-based migration, and toward a points-based system that prioritizes the admission of immigrants with certain education and employment qualifications. These proposals have received renewed attention under the Trump administration. Here are key details about existing U.S. immigration programs:

In fiscal 2016, 804,793 people received family-based U.S. lawful permanent residence. This program allows someone to receive a green card if they already have a spouse, child, sibling or parent living in the country with U.S. citizenship or, in some cases, a green card. Immigrants from countries with large numbers of applicants often wait for years to receive a green card because a single country can account for no more than 7% of all green cards issued annually. President Donald Trump has proposed restricting family-based green cards to only spouses and minor children. For other family members, a Senate bill would make a limited number of green cards available under a skills-based point system. Today, family-based immigration – referred to by some as “chain migration” – is the most common way people gain green cards, in recent years accounting for about 70% of the more than 1 million people who receive them annually.