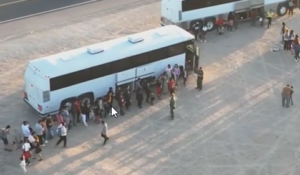 Jean-Pierre sat down with MSNBC’s Alex Wagner, who asked the White House press secretary if President Biden has attempted to reach out to Republican governors such as DeSantis or Greg Abbott, R-Texas, about them sending migrants to different parts of the U.S.

“I don’t know why we would reach out to a governor or governors who are clearly playing a political game. It is something they’re doing not to find a solution, but to literally put peoples’ lives at risk,” she said.

Jean-Pierre said the administration would continue to call out the “political game.”

“Look, we are ready, we’ve always been ready, on day one, the president has said he’s put forward his immigration legislation, a comprehensive piece of legislation and he’s said let’s figure out how do we fix this broken system. But instead, that’s not what they want to do, they don’t want to vote for a historic amount of funds that would go to DHS to deal with this issue, they don’t want to work on a real solution, so we’re going to call that out, Alex.” she continued.

Jean-Pierre joined MSNBC’s “Morning Joe” on Wednesday and discussed the president’s interview with “60 Minutes.” She was asked about the Republican governors who were bussing migrants to major cities and places such as Martha’s Vineyard.

“What you’re seeing from Gov. DeSantis is inhumane. It is not solving a problem. It’s not a solution. It’s causing chaos and confusion,” she said.

She added that if she were DeSantis, she would have reached out to his Republican colleagues in the Senate about helping to solve the problems at the border.