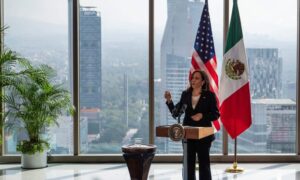 Vice-president’s ‘get tough’ stance on corruption overshadowed by backlash over ‘do not come’ message to migrants.

Kamala Harris has returned to the US from her first foreign trip and big test since becoming vice-president – and taking over the hot-potato issue of immigration – battered by criticism over her harsh “Do not come” message to desperate migrants and her testy ambivalence over visiting the US-Mexico border.

Harris arrived back on US soil from a three-day trip to Guatemala and Mexico just as Joe Biden flew out to the UK on Wednesday on his first overseas venture since winning the White House.

His may be a higher-stakes visit aimed at reassuring European allies and confronting Russia after the divisive era of Donald Trump.

But Harris’s more short-haul foray was never going to be plain sailing, either with the aim being to tackle “the root causes” of hundreds of thousands of migrants making the dangerous trek to America’s southern border, seeking entry to the US.

Most are attempting unlawful entry or trying to appeal to the border authorities to allow them to apply for asylum through the US courts.

With factors such as poverty and government corruption, a legacy of war and dictatorship, and as much foreign hindrance as help in Central American politics over the decades, any trip by a new US president or vice-president is fraught with high risk of failure.

On top of that, newer trends such as increased migration forced by the climate crisis guaranteed that Harris was never going to achieve one-trip fixes.

But although her hosts declared her visits a success, the “get tough” stance she touted with leaders over corruption was overshadowed by an awkward interview and criticism from US progressive torchbearers such as the New York congresswoman Alexandria Ocasio-Cortez over her stark remarks aimed at migrants.

Ocasio-Cortez called out Harris on Twitter, saying her comments were “disappointing to see”.

By Edward Helmore for THE GUARDIAN
Read Full Article HERE