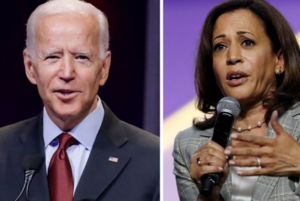 BIDEN LAUGHS AT KAMALA HARRIS SHIFT ON BUSING: ‘OUR POSITIONS AREN’T ANY DIFFERENT’

“That is not correct, I’m not in favor of decriminalizing or not having consequence for, let me be very clear, we have to have a secure border, but I am in favor of saying that we’re not going to treat people who are undocumented cross the border as criminals, that is correct, that is correct,” Harris said Friday.

Aiming to clear up any confusion, McCain said, “I believe that if someone crosses over the border illegally, it’s illegal. And you would decriminalize it.”

The rapid flip-flop was just the latest muddling or backtracking Harris has done when it comes to key Democratic policy issues. At one point, she had expressed support for Bernie Sanders’ Medicare for All plan acknowledging that it would eliminate private insurance, then changed her stance by claiming to be against eliminating private insurance.

Harris also famously attacked former Vice President Joe Biden, the current Democratic front-runner, for his past opposition to federally mandated busing to integrate schools. Days later, she appeared to have Biden’s same stance on the issue.

“I think of busing as being in the toolbox of what is available and what can be used for the goal of desegregating America’s schools,” Harris said, but when pressed on whether she believes in federally mandated busing, she responded, “I believe that any tool that is in the toolbox should be considered by a school district.”