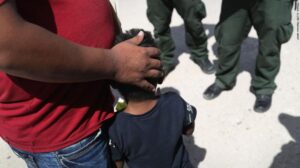 The Justice Department formally rescinded the Trump administration’s controversial “zero tolerance” policy that called for the criminal prosecution of adults crossing the border and led to the separation of thousands of families, according to a memo obtained by CNN.

The policy was ended by former President Donald Trump in June 2018 after mounting criticism, but on Tuesday, the department moved to rescind it altogether.

“Consistent with this longstanding principle of making individualized assessments in criminal cases, I am rescinding — effective immediately — the policy directive,” acting Attorney General Monty Wilkinson said in a memo to federal prosecutors.

“While policies may change, our mission always remains the same: to seek justice under the law,” Wilkinson added.

The Associated Press first reported on the memo.

Lawyers are still unable to reach the parents of 611 children who had been split from their families by US border officials between 2017 and 2018, according to the latest court filing.

“This action is a good start, but what is really needed is for Congress to repeal penalties for the unauthorized entry that result in family separation,” said American Civil Liberties Union lawyer Lee Gelernt, the lead attorney in the family separation lawsuit.
“And the end of the zero-tolerance policy does not impact already separated families. The Biden administration should reunite the separated families in the United States and provide them citizenship, resources, care, and a commitment that family separation will never happen again.”

President Joe Biden has pledged to undo Trump’s policies and on Friday is expected to announce a task force that will focus on reuniting separated families.

In a statement to CNN, a Justice Department spokeswoman called the “zero tolerance” policy “inconsistent with the Department’s longstanding principle that we exercise judgment and make individualized assessments in criminal cases.”

“Today’s action restores to prosecutors their traditional discretion to make charging decisions based on a careful review of the particular facts and circumstances of individual immigration cases,” the spokeswoman said.