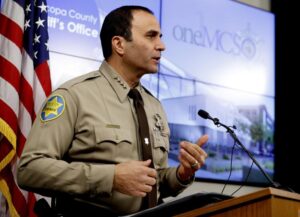 PHOENIX (AP) — A judge is scheduled to hear arguments Thursday over whether the sheriff of metro Phoenix, like his predecessor Joe Arpaio, should face a contempt of court of hearing in a longstanding racial profiling case against the sheriff’s office.

The lawyers who won the racial profiling case eight years ago are now arguing Sheriff Paul Penzone should face a civil contempt hearing for not complying with a court-ordered overhaul of his agency’s much-criticized internal affairs operation, which has a backlog of 1,800 cases, each taking an average of 500 days to complete.

They say Penzone is out of compliance with a requirement that internal investigations be completed within 60 or 85 days, depending upon which operation within the agency handles the cases.

It’s unclear what sort of penalties Penzone could face if the court agrees to hold a hearing and finds him in civil contempt. Generally, the punishments for civil contempt are fines, though on rare occasions jail time is given to those who refuse a judge’s order to provide information or take action.

During his last year as sheriff in 2016, Arpaio was found in civil contempt for ignoring a 2011 court order to stop his traffic patrols targeting immigrants. After the six-term Republican sheriff was ousted by the Democratic Penzone, Arpaio was found guilty of criminal contempt for disobeying the order. He was spared a possible jail sentence for the misdemeanor conviction thanks to a 2017 pardon by then-President Donald Trump.

U.S. District Judge Murray Snow concluded in 2013 that sheriff’s officers had racially profiled Latinos in Arpaio’s traffic patrols that targeted immigrants who were in the United States illegally. As a remedy to the verdict, Snow ordered two overhauls of the agency, one of its traffic enforcement division and another its internal affairs operation, which had been criticized for biased decision-making under Arpaio that shielded sheriff’s officials from accountability.