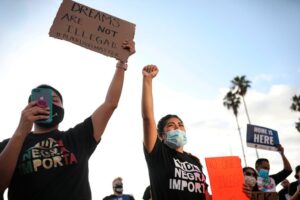 Up to 300,000 additional undocumented immigrants could be allowed to apply for protection from deportation under a new court ruling. President Trump had sought to cancel the program.

A federal judge on Friday ordered the Trump administration to fully restore an Obama-era program designed to shield young, undocumented immigrants from deportation, dealing what could be a final blow to President Trump’s long-fought effort to end the protections.

The program, known as Deferred Action for Childhood Arrivals, was created by President Barack Obama in 2012. Over the years, it has protected more than 800,000 individuals, known as “dreamers,” who met a series of strict requirements for eligibility.

But those protections have been under legal and political siege from Republicans for years, leaving the immigrants who were enrolled in DACA uncertain whether the threat of deportation from the United States could quickly return with a single court order or presidential memorandum.

Judge Nicholas G. Garaufis of the U.S. District Court in Brooklyn directed the administration on Friday to allow newly eligible immigrants to file new applications for protection under the program, reversing a memorandum issued in the summer by Chad Wolf, the acting secretary of Homeland Security, which restricted the program to people who were already enrolled. As many as 300,000 new applicants could now be eligible, according to the lawyers who pushed for the reinstatement.

The memo from the Department of Homeland Security also limited benefits under the program, including permits to work, to one year, but the judge ordered the government to restore them to a full two years. Judge Garaufis, who was appointed by President Bill Clinton, also said the government must find a way to contact all immigrants who are eligible for the program to inform them of the change.

The judge said the government must announce the changes to the program on its website by Monday.

Lawyers who had challenged the Trump administration in the case celebrated the decision, saying that amid a pandemic and global economic recession, it granted some stability to a vulnerable group.