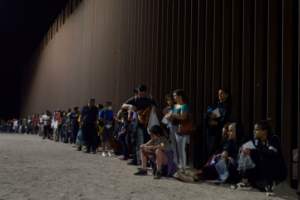 The Biden administration officially put an end to one of the Trump administration’s cruelest immigration policies Monday, after getting clearance from the Supreme Court and a federal judge.

The Migrant Protection Protocols, commonly known as the “Remain in Mexico” policy, was introduced in 2019 and required asylum-seeking migrants crossing into the U.S. from Mexico to wait in Mexico until their United States immigration hearings. It was a drastic revision of immigration law meant to serve the Trump administration goal of significantly reducing the number of migrants entering the U.S. from its southern border. And immigration experts have noted the policy endangers many asylum-seekers by forcing them to live in unsafe conditions.

President Joe Biden suspended the policy on his first day in office, but multiple conservative state attorneys general sued to keep the policy in place. In December, Trump-appointed federal Judge Matthew Kacsmaryk mandated the administration reinstate it. But in June, the Supreme Court ruled that the administration was acting within its purview when it moved to end the policy, forcing Kacsmaryk to lift his injunction.

A news release from the Department of Homeland Security on Monday applauded the decision, saying the Remain in Mexico policy has “endemic flaws, imposes unjustifiable human costs, and pulls resources and personnel away from other priority efforts to secure our border.”

The policy will be wound down in a “quick” and “orderly” process, according to the DHS release. It noted, however, that another controversial immigration-related holdover from the Trump administration, Title 42, is still in place after a court ordered it be reinstated. That policy, which allows the administration to turn migrants away over purported public health concerns related to Covid-19, has been denounced as deeply xenophobic.

In that light, Monday’s announcement about the end of the Remain in Mexico policy was a mixed bag. One cruel, Trumpian immigration policy down. But at least one other remains.