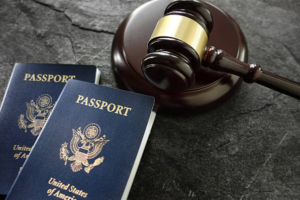 BURLINGAME — Federal immigration judges are being challenged in “unprecedented ways” under a new Department of Justice policy that will require them to complete 700 cases a year — or risk being fired — in an effort to speed up deportations, the president of the National Association of Immigration Judges said Sunday.

Calling the policy “indefensible and unreasonable,” Judge Ashley Tabaddor said the quota will take a significant psychological toll on judges and will compromise their judicial values, forcing them to rule on some cases in just a few hours.

“It’s something that would never, never be tolerated in any other court,” Tabaddor told this newspaper Sunday, speaking under her authority as president of the judges’ union. “It pits the judge’s personal interest against that of the parties before them. And that is in violation of every principle that we have when it comes to our court system and our American judicial system.”

The Justice Department couldn’t be reached for comment Sunday. It first notified immigration judges of the quota in a March memo first obtained by the Wall Street Journal.

The policy, which goes into effect Oct. 1, comes amid an aggressive push by Attorney General Jeff Sessions to slash the court backlog in immigration cases in half by 2020. During a speech in Virginia earlier this month in which he welcomed 44 new judges, Sessions was clear about his expectations.

“As you take on this critically important role, I hope that you will be imaginative and inventive in order to manage a high-volume caseload. I do not apologize for expecting you to perform, at a high level, efficiently and effectively,” he said.

The court will have 395 immigration judges by the end of this month, the highest number in the agency’s history and an increase of more than 30 percent since President Trump took office, according to the Washington Post.