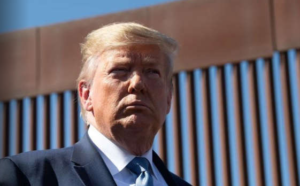 Here’s the new “Big Lie” — Republicans in Congress care about illegal immigration at the U.S.-Mexico border.

If they really cared, they’d fix the problem. Instead, they are happy to use it to falsely accuse President Biden and Democrats of wanting open borders.

Another round of alarmist Republican shouting about the border will begin next week when the Biden administration plans to end the use of Title 42. This public health law has been used to stop migrants from legally seeking asylum in the U.S.

Title 42 became law in 1944, aimed at preventing the spread of diseases like tuberculosis and malaria. In 2020, as the pandemic hit, the Trump administration used Title 42 as a flimsy patch to slow the flow of migrants crossing the border.

Now, with the danger from COVID-19 past its peak and most mandates lifted, there is little justification for the use of Title 42 at the border.

But more than 80 percent of Trump-led Republicans say it should be kept, at least for now.

On the other hand, 64 percent of Democrats want to stop the inappropriate use of Title 42 at the border, according to a recent CNN/SSRS poll.

Senate Republicans are currently threatening to withhold votes for funds that would aid COVID-19 prevention and treatment. They are demanding a vote on an amendment to continue using Title 42 at the border.

Republicans are gambling with “the health security of the nation,” Sen. Robert Menendez (D-N.J.) said last week. “I don’t think Title 42 has anything to do with COVID.”

Senate Majority Whip Dick Durbin (D-Ill.) has said Democrats may have no choice but to give the Republicans a vote on the amendment to get critically needed money for more vaccines.

Durbin knows Republicans in the Senate are avoiding work on real immigration reform.