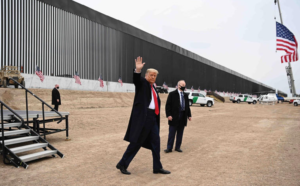 Joe Biden’s administration has been ridiculed by Republicans for quietly agreeing to complete Donald Trump’s border wall in one of the busiest spots for illegal immigration along the US border.

The US president promised during the 2020 election campaign that there would “not be another foot of wall constructed” on his watch.

But on Thursday the administration agreed to the completion of Mr Trump’s controversial wall in an open area of southern Arizona, near Yuma, where four wide gaps have made the location one of the busiest corridors for illegal crossings.

It comes at the behest of Mark Kelly, an Arizona Democrat and one of the most vulnerable senators in this year’s elections, as immigration control ranks as a top priority among voters.

“For too long, the Morelos Dam area has been an operational challenge for Border Patrol agents to properly secure the border and keep our communities safe,” said Mr Kelly, who has been at odds with his party leadership over their handling of the US-Mexico border.

Separately, the Biden administration has plans to construct two 30-foot border barriers through San Diego’s historic Friendship Park, the southwesternmost corner of the United States, where separated families have come to meet for decades.

Unlike many other policy decisions, the measures were not trumpeted by the White House. Instead, it was quietly announced by the Department for Homeland Security, which framed the work to complete the project near the Morelos Dam as a measure that would better protect migrants who risked being hurt, slipping or potentially drowning through a low section of the Colorado River.

The move was ridiculed by Republicans, who have used immigration control to pummel the Biden administration ahead of November’s midterm elections.

Many mocked Mr Biden’s robust opposition to Mr Trump’s controversial wall in response to the announcement on Friday.