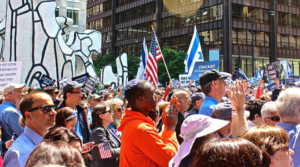 On a hot and steamy Sunday, blocks from where tourists had lined up to see the Liberty Bell and under the eyes of police, more than 150 demonstrators gathered by the U.S. Custom House in Philadelphia to take issue with the country’s policies on immigration.

“We are not going to be silent,” said Rabbi Joshua Waxman, from Or Hadash Congregation in Fort Washington, who helped lead the protest.

Waxman said President Trump’s rhetoric and his restriction on immigration violate the principles upon which the county was founded and have turned people against each other. The protest, he said, gave voice to those who have tried to cross the border and now sit in detention. “Jewish people know what it is to be a despised minority,” Waxman said.

The event occurred on the Jewish holiday Tisha b’Av, which commemorates a series of tragic events in Jewish history. Part demonstration, part remembrance and part prayer service, the protest saw participants chant from the Book of Lamentations, which describes the sorrow after the fall of Jerusalem.

The group included young families with children. Participants stood in silence for most of the event, occasionally joining in song. They carried handmade signs that read “I am here because of immigrants,” “End racism against refugees,” and “Indivisible with Liberty and Justice for all: No exceptions.”

“We’ve been here before,” Rabbi Avi Winokur, from the Society Hill Synagogue. He recounted the story of the ship St. Louis, a German ocean liner that came to the United States in 1939 with more than 900 refugees who were denied entry,

“We are reenacting what we once did so terribly,” Winokur said, referring to the current treatment of immigrants.

“The immigration system is broken,” said Blanca Pacheco, of the New Sanctuary Movement in Philadelphia. For years, she said, the U.S. has sold immigrants a dream to come to the county for a good life. Once here, she said, they find the path to citizenship blocked.