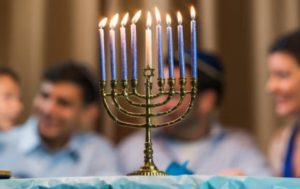 From fiery protests outside detention centers in Texas, New Jersey and Rhode Island to a sit-in that blockaded an Amazon store in New York, a fledgling coalition of liberal Jewish groups is increasingly making itself heard as it fights the Trump administration’s immigration policies.

Using the social media tag #JewsAgainstIce, the movement has likened President Donald Trump’s actions on asylum and incarceration to what went on as the Holocaust was taking shape.

“It’s a cause that the Jews feel very deeply,” said Rabbi Jill Jacobs with T’ruah, a human rights organization that represents 2,000 rabbis nationwide. “Our entire history is about being kicked out of one place and trying to find a safe place to live.”

While Jewish groups have long supported immigrant rights, many began working together more intensely in recent weeks after reports of squalid conditions at immigration centers. Activists say Trump’s comments this week about the “disloyalty” of Jews who vote Democratic will only galvanize them further.

Organizers say the loose coalition that also uses the hashtags #CloseTheCamps and #NeverAgainIsNow embraces tens of thousands of activists nationwide and works with some Latino and Muslim organizations as well. (“Never again” has historically been a rallying cry among Jews when referring to the Holocaust.)

“We see what’s happening to immigrants all over the country is really the same foundation that was laid before the Holocaust happened,” said Sophie Ellman-Golan with Never Again Action, a new group that has played a key role in the coalition. “We’re going to draw those parallels, and we’re going to speak out.”

Her group, which sprang up in late June and is working with longtime Jewish social justice organizations, likens U.S. immigrant detention centers to concentration camps, after dire reports over the summer of cramped, filthy conditions, poor medical care and children being denied toothbrushes.

Never Again Action’s kickoff event was a June 30 protest outside a detention center in Elizabeth, New Jersey, where 200 activists showed up and dozens were arrested.