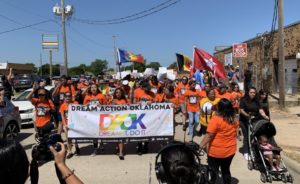 Native Americans and Japanese Americans were among the hundreds of people who gathered in Lawton, Oklahoma, on Saturday to protest the Trump administration’s plan to use Fort Sill, which was a Japanese American internment camp in World War II, to detain undocumented migrant children.

“We will not allow history to repeat itself with a concentration camp for immigrant children,” said Brenda Lozano, program development coordinator at Dream Action Oklahoma, in a statement. “Generations of Japanese, Native American, and Black people have all been hurt by Fort Sill.”

According to the U.S. Department of Health and Human Services, Fort Sill will be used “as a temporary emergency influx shelter” to house undocumented children.

About 40,900 migrant children have been taken into custody this year through April 30, a 57 percent increase over last year, according to HHS.

Fort Sill served as an internment camp during World War II, holding around 700 Japanese Americans. They were among the more than 100,000 people of Japanese ancestry in the U.S. rounded up and detained in camps at that time.

“It is horrific that a place like Fort Sill, which was once used to unjustly detain Japanese Americans, should be used today to hold migrants. We cannot allow our past mistakes to become present policy,” actor and activist George Takei, who lived as a child in two internment camps, said in a United We Dream statement.

🚨HAPPENING NOW! Native Oklahomans, Japanese Americans, Jewish and undocumented leaders are outside a military base, #FortSill, demanding they STOP the opening of a concentration camp! #CloseTheCamps @UNITEDWEDREAM @actdottv https://t.co/OuVXu6a7lT

“This is why our elders came to Fort Sill to demand that this army base not be used yet again to detain 1400 migrant children,” added Mike Ishii, co-chair of Tsuru for Solidarity.

Apache indigenous people are also among those who have been held in Fort Sill.