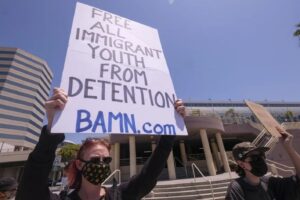 Immigrants in ICE custody are already at high risk.

Immigrants in detention have been at heightened risk throughout the pandemic. They have been confined to environments where social distancing is impossible, at times without adequate prevention and sanitation measures and with limited access to vaccines and information about them.

Now they’re even more vulnerable as the highly transmissible omicron has become the most common coronavirus variant in the US — and advocates say it’s another factor that adds to the already compelling case for releasing them from detention.

Since the outset of the pandemic, more than 31,000 cases of Covid-19 have been reported at US Immigration and Customs Enforcement facilities, with an infection rate more than three times as high as the overall US infection rate. Cases peaked in May 2021 at around 2,000 cases at a given time and have since declined to just under 300 active cases among 21,000 people in detention as of December 20. Some of the worst outbreaks have occurred in Arizona, New Mexico, Texas, Louisiana, and Georgia.

An ICE spokesperson told Vox that as of December 19, a total of 46,772 people in detention have received Covid-19 vaccinations. But it’s not clear what share of the detained population over time that number represents given that people are constantly being booked in and released. It’s also not clear what kind of vaccine those people have received and whether they have received one or two doses or a booster shot. (ICE does not release that information publicly and did not respond to a request for that data.) That makes it hard to measure the efficacy of the agency’s vaccination campaign.

Absent an aggressive vaccination and booster campaign and efforts to reduce the population in immigration detention, it’s only a matter of time before omicron spreads through ICE facilities.