Home Federal Enforcement ‘It Is Our Moral Imperative’: Biden Admin Will Allow Separated Families To Reunite In U.S. 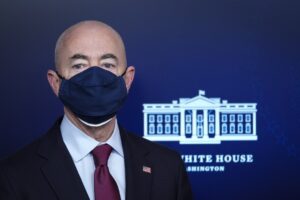 Families cruelly separated at the southern border by the previous administration will have the option of being reunited in the United States if they wish, Department of Homeland Security (DHS) secretary and reunification task force chair Alejandro Mayorkas announced on Monday. In a release outlining a “statement of principles,” the task force said it would further work to identify ways for families to pursue permanent status here.

“We are dedicating our resources throughout the Department of Homeland Security and the federal government, and bringing our full weight to bear, to reunite children who were cruelly separated from their parents,” Mayorkas said in the statement, which also officially announced respected advocate Michelle Brané as task force executive director. “It is our moral imperative to not only reunite the families, but to provide them with the relief, resources, and services they need to heal.”

The announcement was a monumental victory for families and their advocates, who had been pressuring the Biden administration to give parents the option of reuniting in the U.S. if they wished (some families may wish to reunite in their home countries). While President Biden as a candidate in the 2020 presidential race had committed to creating a task force to reunite separated families, he had not said if they would be able to reunite here.

“We applaud Secretary Mayorkas’ commitment to remedy the torture and abuse of families who were separated from their children in immigration proceedings,” American Civil Liberties Union (ACLU) executive director Anthony D. Romero said. The organization is among the groups on the ground working to locate parents. “Of course, the devil is in the details and Secretary Mayorkas has to shed all the caveats and qualifications around his announcement and follow through with everything that’s necessary to right the wrong.”