Home Resources Is Immigration Bad for the Economy? 4 Essential Reads 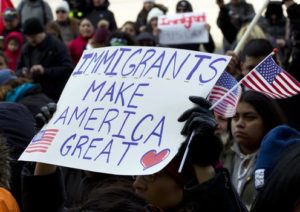 One of President Donald Trump’s main arguments for his “zero tolerance” immigration policy is that immigrants are bad for the economy and cost U.S. citizens jobs.

Economists and other scholars have been tackling this topic for years, resulting in many studies that explore the effect immigrants of different stripes have on the economy.

All in all, scholars who have written for The Conversation have concluded immigration’s impact is actually quite positive.

“A central issue is that it is easy to think that the labor market is a zero-sum game and the number of jobs available is fixed,” writes Shih. “The reality, however, is much more complex.”

An immigrant interested in the same job as you might reduce your odds a bit, but another with a good idea might end up creating hundreds of thousands of jobs, he writes.

In reality, the number of available jobs in an economy isn’t fixed; it’s always in flux. And since 2010, it has been steadily rising, which “means more jobs for everyone.”

In addition, Shih explains, “Both individual workers and employers constantly readjust to changing conditions. In fact, many economists have found evidence that natives quickly adjust to the labor market forces of immigration and in a way that often yields positive benefits.”

Despite this evidence, politicians continue to use similar “bad for the economy” arguments to push for limits on legal immigration to the U.S. The House, for example, has been considering legislation that would end the green card lottery and move the U.S. toward a merit-based system.

That would be a big mistake, argues Ethan Lewis, an economist at Dartmouth College. Immigrants who come to the U.S. with the green card lottery tend to have diverse backgrounds and skill sets that are different from Americans.

“The key thing to bear in mind is that the more homogeneous and similar immigrants are to natives, the greater the odds they’ll in fact have a negative effect,” he explains.