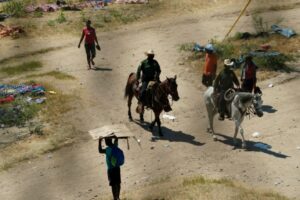 The rights group detailed the incidents in a report released on Thursday. They include allegations of physical, sexual and verbal abuse, as well as due process violations and discriminatory treatment that took place between 2016-2021.

Clara Long, the associate US director of the group, called the conduct detailed in the reports “jaw-dropping”.

“These internal government documents make clear that reports of grievous abuses – assaults, sexual abuse, and discriminatory treatment by US agents – are an open secret within DHS,” she said in a statement on Thursday.

The documents were obtained through a Freedom of Information Act request, and the statuses of the investigations detailed were not immediately clear. HRW said it provided summaries of some of the incidents to the Department of Homeland Security, which oversees Customs and Border Protection (CBP) and Immigration and Customs Enforcement (ICE), but were not provided updates.

Still, the report offers insights into some of grave complaints immigrations officials have received in recent years.

While most of the accounts appear to be during the administration of former US President Donald Trump, who made closing US borders and repelling immigrants a key part of his political platform, his successor Joe Biden has come under scrutiny, as well.

Biden’s administration has struggled to square its promises of a humane approach to undocumented migrants and asylum seekers with a surge in crossing along the southern border. On Wednesday, US media reported arrests by border patrol agents in fiscal year 2021 soared to their highest ever recorded – 1.7 million.

Meanwhile, the expulsion of predominantly Haitian migrants from a camp along the US-Mexico border in September has prompted the most recent round of accusations of dehumanising treatment by immigration authorities.