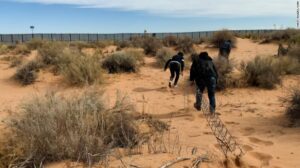 Ciudad Juárez (CNN) The blue sedan looked like any other driving along a Mexican highway until the mid-morning sun glinted off long, thin pieces of metal lashed to the car’s left side: A column of rebar about 20 feet long was tied precariously to the side mirror.

In most other places in Mexico, this might have just been some workers doing construction without the right truck for the job.

But this car was driving right along the border wall in Ciudad Juárez, a city just south of the US-Mexico line, with El Paso, Texas on the other side — a city where human smuggling abounds.

Two human smugglers, called polleros in this part of the world, were in the car along with two migrants in the backseat who wanted to cross illegally into the United States. And as we would soon see, the group would use that rebar column as a makeshift ladder to hoist those two migrants up and over the wall and into the US.

Tens of thousands of migrants arrive at the US border each week, with record-setting numbers of unaccompanied minors among them. The spike in numbers has once again overwhelmed an unprepared US immigration system, which has faced this type of crisis repeatedly in years past but has yet to resolve entrenched problems like overburdened asylum courts and facilities ill-equipped for housing children.

The resurgence has also put a renewed focus on the role human smugglers play in getting so many migrants to the border.

The business of migrant smuggling

The smugglers are brothers and run the business out of their family home, smuggling people into the US with the help of one brother’s 14-year-old son. Makeshift ladders laid out in the backyard were the only real giveaway of the family business.

“It’s super light,” said the 14-year-old, picking up one of the ladders. He works with his father and uncle moving somewhere between 10 to 35 migrants per week on average, he says.