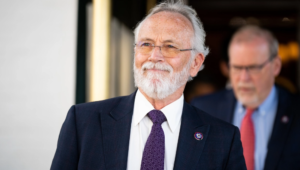 Rep. Dan Newhouse had a message for the grassroots organizers who gathered outside the Capitol to discuss what chances remain for bipartisan immigration legislation, such as his bill to address the labor shortages harming farmers in both red and blue states.

“The ball is in their court,” the Washington Republican said at the late April event. He asked for help “to urge our senators to take action, to build urgency around this issue, to pass much, much needed immigration reform.”

As concerns about rising levels of migration to the southwest border dominate discussions on Capitol Hill, lawmakers and advocates are pointing to high inflation rates and critical labor shortages in a push for the Senate to take action soon on more narrow immigration bills that could boost the U.S. economy.

They see an opening ahead of the midterm elections in November for efforts to revise guest-worker visa problems — including H-2A seasonal agricultural visas and H-2B visas for non-agricultural labor, like hospitality and food processing.

The bill Newhouse sponsored along with California Democratic Rep. Zoe Lofgren, dubbed the Farm Workforce Modernization Act, passed the House in March 2021 with 30 Republican votes. That makes it one of the most bipartisan immigration proposals currently circulating in Congress.

Yet the measure, which would allow some farmworkers to apply for green cards and revise the H-2A visa program, has stalled for more than a year as Colorado Democratic Sen. Michael Bennet and Idaho Republican Sen. Michael D. Crapo negotiate a Senate version.

The senators ramped up efforts on the bill in February because of high inflation rates and the approaching elections, according to a person familiar with the discussions, who was not authorized to speak publicly because of the sensitive nature of the negotiations.

Giev Kashkooli, legislative director for United Farm Workers, which supports the farmworker legislation, noted this is the first time in two decades in which a bill to legalize migrant farmworkers has passed one chamber and has the support of leadership in the other chamber, as well as the president.