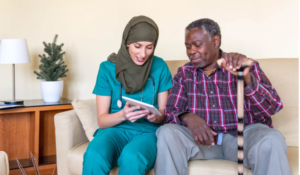 Long-term care provider advocates have been urging the federal government to look at immigration reform as one solution to the direct care workforce shortage. Before leaving Washington, DC, for their home offices next week, Congress is expected to vote on one such measure.

“There are not enough workers in the US to fill these jobs,” she added. “We must look to foreign workers to fill some of these jobs so our seniors can age with the dignity they deserve.”

The House of Representatives is expected to vote next week on the bipartisan Equal Access to Green cards for Legal Employment Act of 2022, Bloomberg Government reported. The EAGLE Act would increase the per-country cap on family-based immigrant visas from 7% of the total number of such visas available per year to 15% and would eliminate the per-country cap for employment-based immigrant visas.

“Many lawmakers have touted the bill, which has broad bipartisan support, as a way to streamline green card access for highly skilled immigrants and meet employer demands in the US,” the media outlet reported.

EAGLE is but one of the reform measures advocates are calling for. ASHA and LeadingAge both wrote to leaders in Congress this month asking the lame duck session to address the Deferred Action for Childhood Arrivals program, Temporary Protected Status program and other reforms.

“We ardently support the EAGLE Act (HR 3648) that the House is considering next week, and we have actively advocated for the Citizenship for Essential Workers Act, the Health Care Workforce Resilience Act, the Workforce for an Expanding Economy Act and the Essential Workers for Economic Advancement Act,” a representative of the American Health Care Association / National Center for Assisted Living told the McKnight’s Business Daily Thursday.