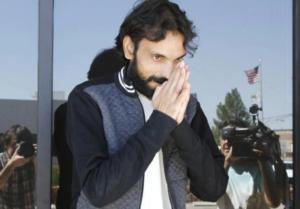 An Indian immigrant who lost a third of his weight during a 70-day hunger strike over the rejection of his asylum claim has won temporary release after a year in US detention.

Ajay Kumar, 33, bowed with his hands clasped together in a traditional Indian greeting as he walked away from a detainee processing center in El Paso, Texas, with a tracking device around his ankle: a condition of his release.

He was accompanied by human rights activists, who had been galvanized by medical personnel force-feeding him. The painful procedure involves pumping liquid food into the stomach via a tube through his nose.

Immigration and Customs Enforcement (Ice) officials agreed to a deal last week in which Kumar and another Indian national resumed eating on a promise that they would be released, according to their lawyers. The men began eating again Saturday and had been kept under medical observation.

“I got my freedom,” Kumar said. “I’ve been waiting a long time for this.”

Kumar and fellow Indian detainee Gurjant Singh began their hunger strike on 8 July after rejection of their asylum claims and denial of bond. They had spent almost a year in an Ice detention facility in Otero, New Mexico, and had not been charged with a crime. They believe the judge did not consider the facts of their cases individually.

By Associated Press for THE GUARDIAN
Read Full Article HERE