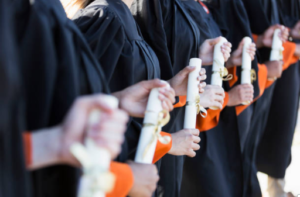 By 2060, almost half of the state’s residents will be Latino. College graduation rates have improved, but only 18% of Latino adults have a degree.

For California to maintain its standing as the fifth-largest economy in the world, the state has to produce at least 1.65 million college graduates by 2030. But it won’t reach this goal without Latino educational success, and many of the state’s schools are not preparing young Hispanics for higher education.

Hispanics are intrinsically tied to the state’s future — by 2060, almost half of California’s population will be Latino “and disproportionately young,” according to “The State of Higher Education for Latinx in California,’ a report by The Campaign for College Opportunity.

Nearly 40 percent of all 38.6 million people living in California are Latino, including over half of the state’s K-12 student population and four in 10 college undergraduates.

“You can’t ignore such a significant number and not care about their educational success,” Michele Siqueiros, president of The Campaign for College Opportunity and co-author of the report, told NBC News.

California has seen a spike in college-ready Latinos who graduate high school.

In 2016, 86 percent of 19-year-olds had a high school diploma or equivalent and 39 percent prepared for college, according to the report.

Over 1.3 million Latinos were enrolled in college in California, a 91 percent increase from 2000.

However, although more Latinos are attending universities, only 18 percent of Latino adults in the state have a degree — a rate that’s lower than any other racial or ethnic group.

Education experts worry about this trend, not just in California but across the country.

“While Latino college-going is improving, change must happen faster to increase the numbers of Latino college graduates,” said Sarita Brown, president of Excelencia in Education, an organization based in the nation’s capital that measures Hispanic college completion and analyzes best practices in colleges and universities that help increase graduation rates.