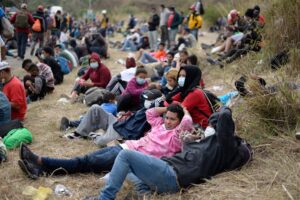 “The situation at the border isn’t going to be transformed overnight,” a senior Biden transition official told NBC News in an exclusive interview.

WASHINGTON — As thousands of Honduran migrants make their way to the U.S. border, the incoming Biden administration, just days from taking office, has a message: Don’t come now.

President-elect Joe Biden has promised an end to the strict immigration policies of the Trump administration, which focused on building a border wall and restricting eligibility for asylum.

But those promises may be put to the test in the new government’s first days. If would-be emigrants from Central America perceive that now is the time to travel to the U.S., the southern border could quickly be overwhelmed before systems are put in place to handle the influx.

A senior Biden transition team official said the perception that the Biden administration will be able to allow all arriving asylum seekers to enter the U.S. to make their claim on day one is false.

“The situation at the border isn’t going to be transformed overnight,” the transition official told NBC News in an exclusive interview.

But the official declined to say when asylum seekers might be able to come to the U.S. and whether they will be detained as they await a court hearing.

An estimated 9,000 Honduran migrants are fleeing food-scarce regions devastated by two hurricanes, drought and economic hardship. On Friday night, about 2,000 members of the caravan pushed past Guatemalan authorities and entered Guatemala without showing documentation or negative COVID screenings, the Associated Press reported. The caravan may arrive at the U.S. border in the coming weeks.

While some may be spurred by promises of an easier path to the U.S., in the past increases in immigration have occurred around U.S. elections and transitions of power. There was a spike in migration in late 2016 and early 2017, just before Trump took office, and caravans from Central America arrived in southern California in 2018, around the mid-term elections.