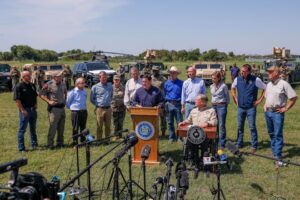 Ten Republican governors on Wednesday ramped up pressure on the Biden administration to take more aggressive action at the U.S.-Mexico border, releasing their own plan that includes long-shot requests like finishing Trump’s border wall.

Gathered in a field in Texas’s Rio Grande Valley — and positioned between a row of television cameras and a line of helicopters and Humvees — the governors lambasted the White House for what they described as its failure to keep Americans safe from the “out of control” situation at the border.

“We can turn things around,” Arizona Gov. Doug Ducey said. “We can keep drugs out of our communities and our schools and we can make our streets safer. We can have an immigration policy that doesn’t include men on horseback herding migrants. President Biden, this is up to you.”

Ducey and Texas Gov. Greg Abbott were the only governors from states bordering Mexico at the event, which included chief executives from Georgia, Iowa, Idaho, Montana, Nebraska, Oklahoma, Wyoming and Ohio.

Yet even before the governors released their plan, Democrats decried them for staging what they described as a political stunt.

“Instead of working on the top issues for the people of Arizona, like ending this pandemic and keeping families safe, Doug Ducey has decided to leave the state entirely to try and score cheap political points as he eyes his next political move,” Arizona Democratic Party Chair Raquel Terán said in a statement. Teran is also a state senator.

Ducey is term-limited and will finish his stint as governor in early 2023. His role leading the Republican Governors Association, which seeks to put conservatives in office, is seen by some as an indicator he might seek higher office.

Ducey has led the chorus of Republican governors and lawmakers pushing back against the Biden administration’s border policies, which relaxed aggressive and sometimes inhumane enforcement during Donald Trump’s four years in the White House.