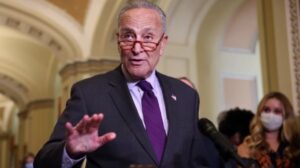 Senate parliamentarian Elizabeth MacDonough has ruled against Democrats’ efforts to include a massive immigration reform effort in their $3.5 trillion proposed spending bill, dealing the party a setback that very likely closes the door on efforts to include a pathway to citizenship in the partisan legislation.

Democrats and Republicans made arguments more than a week ago before MacDonough, several congressional sources told NPR. Democrats argued that a pathway to citizenship for 8 million immigrants would raise the budget deficit by about $139 billion, a congressional source said, and such an impact would be the rationale for including it in the reconciliation process, which is reserved for budgetary legislation.

That process allows Democrats to pass legislation with a simple majority, sidestepping a filibuster by the GOP in the 50-50 Senate. Republicans have been steadfast in their opposition to the move.

Although MacDonough’s predecessor had warned this could be the outcome, Senate Majority Leader Chuck Schumer and other Democrats expressed deep disappointment and vowed to continue fighting for new pathways to citizenship for immigrants in the country illegally.

“Despite putting their lives on the line during the pandemic and paying their fair share of taxes, they remain locked out of the federal assistance that served as a lifeline for so many families,” Schumer said in a statement. “We will continue fighting to pursue the best path forward to grant them the ability to obtain lawful status.”

Schumer said Democrats would hold additional meetings with the parliamentarian in the coming days to try to find alternate ways to include the citizenship opportunities. However, the odds are stacked against Democrats with no such precedent.

Democrats were charged with proving that immigration reform would have a direct budgetary impact to allow such an issue to be included in a budget reconciliation bill.