Home Politics Immigration was a dominant issue in the 2016 election, but not this time 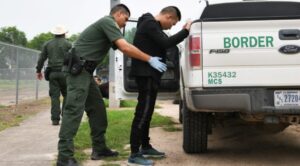 Then, as president, Trump made immigration and border security defining issues of his administration.

Other issues have become more pressing for voters.

“The president’s responses to COVID-19 and the Supreme Court vacancy have overshadowed immigration because those issues are more pressing and recent in people’s minds,” David Bier, an immigration policy analyst for libertarian think tank the Cato Institute, said in an email.

Polls tell the same story. According to a CNBC/Change Research national survey earlier this month, only 15% of voters said immigration was a top issue for them, compared with 40% and 39% for the economy and Covid-19, respectively. The poll surveyed 2,167 likely voters and has a margin of error of 2.1 percentage points.

Trump also has already solidified his standing as a president who’s tough on immigration, from his travel ban on several Muslim-majority countries to his contentious family separation policy at the border.

“This is a very black-and-white issue for America,” said James Carafano, who leads national security and foreign policy at the conservative Heritage Foundation. “It’s not the kind of issue that would really move a lot of voters.”

Instead, Trump’s immigration platform has blended with his “law and order” agenda.

“The law and order rhetoric is combined with our immigration system,” said Andrea Flores, deputy director of immigration policy for the American Civil Liberties Union. “In response to protesters who were fighting for Black Lives in Portland, you saw the Trump administration mobilize this huge immigration enforcement agency of DHS.”

In turn, Biden occupies a precarious position where he has to appeal to more moderate voters concerned about public safety without alienating voters in his party who view the president’s law-and-order rhetoric as fear mongering.