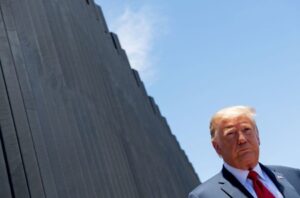 WHEN PRESIDENT DONALD Trump announced his intention to run for president in 2016, he pledged to build a wall on the southern border that Mexico would pay for. He ran on that promise, positioning it so effectively at the center of his campaign that chants of “build the wall” quickly became familiar refrains at his rallies.

In 2018, before the midterm elections in which Democrats ultimately took back control of the House, Trump drummed up fears about a “caravan” of migrants walking through Mexico toward what he characterized as an eventual “invasion” of the U.S.

Despite being Trump’s signature issue as both a candidate and a president, immigration has faded from the discourse surrounding the election, pushed aside by more prominent messaging from both Trump and former Vice President Joe Biden on the coronavirus, the economy and recent racial justice protests. The issue has also slipped in voters’ priorities.

It has not come up often even in moderated settings. Immigration was not discussed in any depth in the first presidential debate, the vice presidential debate, or Trump and Biden’s dueling town halls last week, aside from a passing mention and a single question from an audience member.

Some – but not all – of the explanation, analysts say, is simply that current events are so pressing that they have consumed both campaigns.

“There’s a point at which real-world events intrude upon the campaign in a way that can no longer be ignored,” says Jacob Neiheisel, an associate professor of political science at the University at Buffalo who studies political communication and elections. “And while I’m certain that Donald Trump would love to be talking about immigration, I think that’s probably a pivot too far.”

“The world just isn’t letting him set the agenda in this case,” Neiheisel says.