Home Economics Immigration to America is down. Wages are up 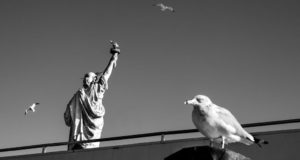 In both 2018 and 2019 nominal wages rose by more than 3%, the fastest growth since before the recession a decade ago. Americans at the bottom of the labour market are doing especially well. In the past year the wages of those without a high-school diploma have risen by nearly 10%. Intriguingly, this has come as America has turned considerably less friendly to immigrants, who are assumed by many to steal jobs from natives and lower the wages of less-educated folk. The two phenomena may be connected—but only for a while.

For the first time in half a century America’s immigrant population appears to be in sustained decline, both in absolute terms and as a share of the total. Net migration to America (ie, the difference between people arriving and people leaving the country) fell to 595,000 in 2019, the lowest in over a decade. This is a profound shift in a country which has often prided itself on its openness to outsiders.

The number of highly qualified immigrants continues to rise. San Francisco airport remains just as crammed with Allbirds-and-gilet-wearing tech investors from all over the world. It appears instead that the overall decline in the foreign-born population is a result of falling numbers of low-skilled migrants. Those numbers slumped a decade ago because of the recession that began in 2007, changing demographics in Mexico and tougher border policing. More recently the number of low-skilled migrants appears to be in decline again. That is probably a consequence of policies implemented by President Donald Trump, as well as the off-putting effects of his rhetoric on foreigners.

Many factors lie behind America’s growing wages. Labour demand is exceptionally high, with unemployment at 3.6%, giving some workers more bargaining power. Ambitious increases in state-level minimum wages in recent years have boosted the wages of the lowest earners. Nominal wages are rising not just in America but across rich countries—even though the foreign-born population in many of them continues to grow rapidly.