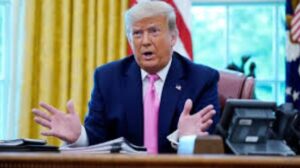 While in office, President Trump has been hyper-focused on immigration policy, specifically surrounding undocumented immigration. As recent polls show the President trailing Democratic nominee Joe Biden less than 100 days until the 2020 election, Trump is reaffirming his trademark policy: many of his most recent presidential actions have targeted immigrants, undocumented or otherwise.

Last month, Trump signed and quickly rescinded an executive order mandating all international students whose classes would not resume in-person return to their countries of origin. Backlash for this order included accusations of blatant racism and nationalism.

On July 29, Trump announced via Twitter that he had repealed an Obama-era Fair Housing Act stipulation intended to combat racial discrimination in suburbia and “foster inclusive communities.”

Trump justified his decision with promises of higher property values and lower crime rates, assuring the white suburban voting bloc that was critical to his 2016 win that they will “no longer be bothered or financially hurt by having low-income housing built in your neighborhood… Enjoy!”

The overwhelming majority response condemned the president for actively engendering a culture of discrimination and acting in gross tone-deafness of the country’s current sociopolitical climate.

Trump’s latest attempts to disembowel the U.S. immigration system comes in the form of a presidential memorandum entitled “Excluding Illegal Aliens from the Apportionment,” barring undocumented immigrants from being counted in congressional districts when the districts are rezoned next year, and subsequently, prohibiting them from being considered when enumerating state representatives.

Experts project that this issue will be resolved in the courts, as has been the case with previous executive orders regarding immigration. The plausibility of this notion is strengthened by intentions to fight the order that has already been voiced by House Speaker Nancy Pelosi (D-CA) and several advocacy groups nationwide.

News of Trump’s memorandum is especially hard to hear for these groups that have devoted endless time and resources to the uphill battle that is convincing immigrant communities to participate in the census in the first place.

By Eva Lynch for THE TOWER
Read Full Article HERE