Home Resources Immigration suspension: All hat and no cattle 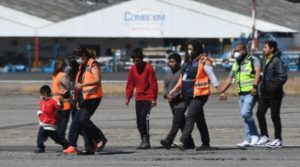 In a late-night tweet on April 20, President Trump said he would sign an executive order to temporarily suspend immigration to the United States, saying he was taking this action “In light of the attack from the Invisible Enemy, as well as the need to protect the jobs of our GREAT American Citizens… .”

This drastic policy shift aimed at immigrants is not supported by the substantial body of empirical research that maintains immigration can have a positive impact on U.S. workers. Ryan Edwards and Mao-Mei Liu published a research study in 2018 that examined trends in employment rates of native U.S. workers compared to trends in foreign-born shares of the local labor force between 2005 and 2016. They found that “employment rates for native workers actually rose by a small amount when more immigrants arrived.” Economist Madeline Zavodny’s research drawn from labor force data spanning 2005 to 2013 concluded that immigration did not increase unemployment or reduce labor force participation of native-born workers. “Instead, having more immigrants reduces the unemployment rate and raises the labor force participation rate of U.S. natives within the same sex and education group,” she reported.

When the president signed the proclamation on April 22, it read much differently than his earlier statements. The suspension is much narrower than early reports suggested. It is in force for 60 days with the proviso that it may be continued if warranted. The proclamation exempts several significant categories of immigrants from the suspension, most notably the spouses and minor children of U.S. citizens, health care professionals, and investors in U.S. businesses. The proclamation also excludes immigrants who are in the United States adjusting their status from a temporary one to lawful permanent residence.

The proclamation left the door open for agricultural guest worker programs and other temporary employment-based migrants. In recent years, over 1 million visas were issued annually to foreign nationals coming to work temporarily in the United States, well over half of whom are not subject to labor market tests to ensure that U.S. workers are not adversely affected.

It looks like what we in my adopted state of Texas call “all hat and no cattle” — much bravado with little substance to support it. Before dismissing the ban as just a political stunt — that is, to throw a piece of red meat to the xenophobic among Trump’s base — it warrants closer study and analysis of the underlying data.