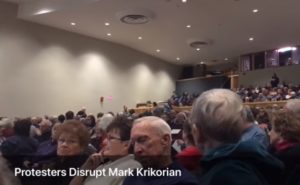 The director of the Center for Immigration Studies opened his speech Thursday at Washtenaw Community College lamenting the fact that no demonstrators disrupted a previous talk at Columbia University.

“I’m actually kind of pleased there are protesters,” he told the crowd of University of Michigan Osher Lifelong Learning Institute participants, referencing some people passing out fliers outside the Towsley Auditorium.

“I spoke at Columbia University to a small group a few weeks ago and there weren’t any protesters. I mean, what am I, chopped liver?”

A few minutes into his speech on limiting immigration into the United States, around 10 student-aged protesters interrupted his speech from the back of the auditorium with calls of “we will not be complicit.”

After protesters shouted for a couple of minutes, UM spokesperson Mary Masson read the university’s policy on free speech and disruption to the crowd, noting that although “there are instances where some or many members of our community may find a speaker or the content of their speech reprehensible or hateful,” a speaker’s appearance “does not imply any endorsement.”

The protesters, met with boos from audience members hoping to hear what Krikorian had to say, were eventually escorted out of the auditorium.

Later, some of those who jeered the protesters turned against Krikorian, groaning and booing after his more pointed rhetoric on limiting immigration primarily to family members of U.S. citizens.

Krikorian’s speech was centered around whether there should be a limit on the number of immigrants the U.S. takes in on a yearly basis, and who should be allowed to enter the country lawfully.

“All of these enforcement questions are sort of a secondary issue – they’re important, because if you’re not enforcing the rules it doesn’t matter what the rules are,” Krikorian said. “The question you really need to be asking first is: What should the rules be?