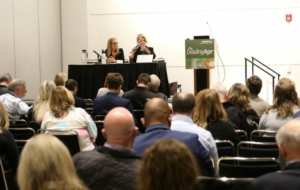 DENVER — There just aren’t enough human beings in the United States to fill the 11 million job openings in the aging services industry, making immigration reform an important target for policy change, according to LeadingAge experts.

During a Sunday forum at the LeadingAge Annual Meeting + Expo, policy experts discussed the challenges — and opportunities — surrounding immigration.

LeadingAge Senior Vice President of Public Policy/Advocacy Ruth Katz said there simply aren’t enough workers in the country to fill the industry’s open positions, the number of which only are going to increase as the aging population grows.

As workforce issues reach crisis proportions in the senior living and care industry, providers are more interested than ever in hiring workers from abroad to fill open positions. But immigration is at its lowest levels in decades due to restrictive policies, the pandemic and politics, according to LeadingAge.

Eileen Scofield, a labor and employment attorney with Atlanta-based Alison & Bird LLP, explained the different types of visas available and how they may — or may not — be useful tools to providers.

Many visa applicants, she said, can wait from two to three years — or up to 20 or more years in some cases — for their green cards or visas. Caps on the number of visas in certain categories and on numbers for individual countries, as well as a backlog of cases due to the pandemic, led the US Citizenship and Immigration Services to extend worker authorizations on all visas “as they try to dig out of the hole.”

“Those caps were set in 1954,” Scofield said. “[The caps] do not reflect the global nature of the world, worker demands or technology.

She said that change can happen at the legislative level, or regulators can introduce new rules or reinterpret regulations by policy.

But don’t hold your breath. In the politically charged climate surrounding immigration, the perception is that immigrants are coming to the US and taking jobs away from American workers.