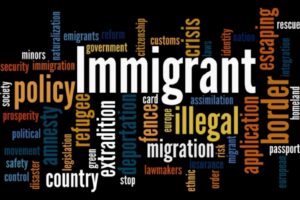 WASHINGTON — Nearly 100 House Democrats are pushing the Senate to expand immigration protections in President Joe Biden’s massive social spending and climate bill, and advocates say that it may be a last opportunity for years to advance any reform.

The letter to Senate Majority Leader Chuck Schumer of New York and the chairman of the Judiciary Committee, Dick Durbin of Illinois, urges the Senate to include in its version a pathway to citizenship for undocumented people—something the Senate parliamentarian already has rejected twice in the bill, known as the Build Back Better Act.

The House didn’t include a pathway to citizenship either, but the House Democrats urged the Senate to act.

“We now write to urge you and the rest of our colleagues in the Senate to reinstate a pathway to citizenship for Dreamers, TPS [temporary protected status] holders, farm workers, and essential workers in the Senate’s version of the reconciliation bill,” says the letter led by Rep. Alexandria Ocasio-Cortez, (D-N.Y.), and 90 other House Democrats.

The House’s version of Build Back Better, which passed last week, includes temporary work and deportation protections through a parole program that allows some undocumented people to change their status to prevent deportation.

Those immigration provisions in the House bill now are under review by the Senate parliamentarian, Elizabeth MacDonough, who is nonpartisan and provides advice and help on Senate rules and procedures.

The situation is complicated because Build Back Better is being considered under a process known as reconciliation so that only a simple majority vote is required in the evenly split Senate.

But it also means that the bill must relate to matters that affect spending, revenues, the deficit or the debt limit.

Senate Democrats already have tried to provide the Senate Judiciary Committee with $107 billion for “lawful permanent status for qualified immigrants” through the reconciliation bill, but the Senate parliamentarian turned it down.