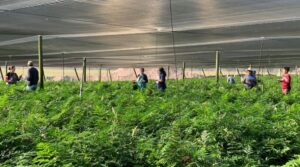 In Florida, the majority of farmworkers are immigrants who hail from South and Central America, according to the U.S. Department of Housing and Urban Development.

WASHINGTON — Working conditions for Florida’s undocumented farmworkers could drastically improve under recently proposed immigration reform legislation that would put them on a long-awaited path to citizenship while also providing labor protections.

“It’s something that needs to happen. We’ve been relying on imported farm labor forever, and we need to do right by the people who pick our fruits and vegetables,” said Nezahualcoyotl Xiuhtecutli, general coordinator at the Farmworker Association of Florida.

Nationwide, foreign-born workers make up 75 percent of the agricultural workforce, and about half of all farmworkers are undocumented immigrants. In Florida, the majority of farmworkers are immigrants who hail from South and Central America, according to the U.S. Department of Housing and Urban Development. Over 70 percent of U.S. Department of Labor investigations of farms found labor violations, including wage theft and inadequate housing and transportation, according to the Economic Policy Institute.

The U.S. Citizenship Act of 2021, unveiled last month by Sen. Bob Menendez, D-N.J., and Rep. Linda Sanchez, D-Calif., would make qualifying farmworkers immediately eligible for green cards, allowing them to apply for citizenship after three years instead of the current eight-year path to citizenship.

To qualify, farmworkers would have to pass a criminal and national security background check, pay a fee set by the Department of Homeland Security, show that they have been continuously present in the United States from Jan. 1 to the date on which they submit their application and show that they have performed at least 2,300 hours or 400 workdays of agricultural work during the five years immediately before they apply.