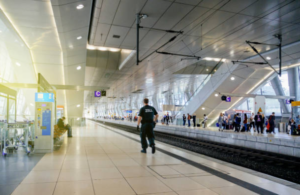 PARIS, Texas — Federal agents raided a manufacturing plant Tuesday and detained about 160 alleged undocumented immigrant workers as part of an ongoing criminal investigation into a company that makes vehicle trailers.

Immigration and Customs Enforcement’s Homeland Security Investigations’ office in Dallas said the operation is expected to be one of the largest of its kind nationally in a decade.

The raid is part of a criminal investigation into the Sumner-based company, Load Trail, for illegally employing foreign workers – a rare enforcement move reserved for repeat violators.

Katrina Berger, special agent in charge of ICE’s HSI office in Dallas, said at a Tuesday afternoon news conference that while the primary focus was the criminal investigation, “We can’t turn a blind eye to those illegal workers.”

Berger said the message she wants other employers who engage in illegal hiring to learn is, “We’re watching. And we’re coming.”

Sumner is an unincorporated community of fewer than 100 residents about 100 miles northeast of downtown Dallas and 12 miles west of Paris, Texas. Load Trail makes trailers that hitch onto vehicles.

Company representatives could not be reached Tuesday for comment.

Load Trail began as a family-owned business in 1996 and has grown to employ more than 500 people on its 100-acre site, according to the company’s website.

The company paid a $445,000 fine in 2014 for hiring undocumented immigrants to work in its plant, according to an ICE report. “The company employed more than 179 unauthorized workers” at the time, the report said.

Dennis Perry, a $16-an-hour Load Trail factory worker, said Tuesday that armed agents came into his workplace from “every corner” right after his break in the first shift. “They just came and raided from every entrance there was.”

Then, “they drew their guns and told everyone to hit the ground.”

Some workers went running. They were tackled, Perry said. A few workers hid by shelves but were quickly discovered. All were searched for weapons and drugs, Perry said.